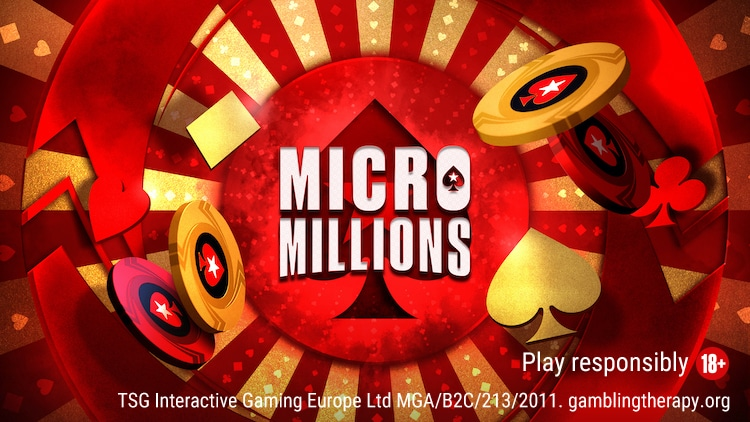 PokerStars’ MicroMillions Low-Stakes Series Smashes Guarantees – More than 1.1 million entries helped push PokerStars’ MicroMillions series to nearly $6 million in total prizes. With 200+ games now in the books, PokerStars ‘ MicroMilliions is over with more than 20% extra in prizes over the two-week festival. The MicroMillions action kicked off with the first events on July 17 , and what followed was two weeks of micro-stakes online poker action that guaranteed nearly $5 million for tournaments that cost as little as $1.10 to play.

While many tournament series cater to players with deep bankrolls, featuring buy-ins of $100 and up, PokerStars’ MicroMillions is aimed at the other end of the player pool. With the cheapest games costing just $1.10 to buy into and the series high rollers coming in at the $50 range, MicroMillions is designed to give small-stakes players the same sort of tournament series experience usually reserved for deeper pockets.

With all the events now complete and the final numbers tallied, it’s plain to see that the operator smashed its guarantees. Initially, PokerStars promised a minimum of $4.7 million in prizes, but in the end, the series collected more than $5.8 million, an increase of 23.80% over the original guarantees .

The biggest prize pool of the entire series was unsurprisingly the $22 Main Event. With $500k guaranteed , an astonishing 27,544 entries showed up to compete for a prize pool that eventually settled in at $550,880, better than 10% above the original promise. That was also the largest turnout for any game of the series, by more than 10,000 entries. Not regulated or for use in Ontario PokerStars MicroMillions Series Summary

Throughout the 207-game series, PokerStars beat the guarantee on 185 of the contests. A total of 14 of those games managed to collect more than double the promised prizes, while two games more than tripled their guarantees.