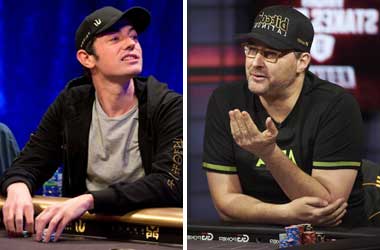 Next Month Will See Round 4 Of High Stakes Duel III: Phil Hellmuth vs. Tom Dwan Summary Both players will play for $800K in prize money

The pair could extend the match through to Round 8

The schedule for the highly-anticipated High Stakes Duel III Round 4 match between Phil Hellmuth and Tom Dwan is finally out. The pair will face each other once again on May 12 at the PokerGO Studio in Las Vegas and will compete for $800,000 in total prize pool, each putting up $400K as buy-in. Who Will Win?

Hellmuth had been undefeated on the popular heads-up show until Dwan came in to replace Nick Wright after the latter declined a rematch following his loss to The Poker Brat during Round 1.

Hellmuth previously won all of his three matches against Antonio Esfandiari in 2020 for $400,000. He did it again in June 2021 when he swept Daniel Negreanu for another $400,000. The Poker Brat continued his winning streak, cutting short Wright’s High Stakes Duel just a month later. It was Dwan who put a dent in his undefeated record.

For the first time on the show, Hellmuth tasted defeat after Dwan cracked his aces with pocket tens to scoop the $100K pot in Round 2 back in August last year. But the Poker Hall of Famer successfully redeemed himself during the rematch back in January , with his Big Slick defeating Dwan’s pocket aces. The high-stakes online poker legend isn’t giving up just yet as he attempts to give The Poker Brat his second defeat a couple of weeks from now. Hellmuth and Dwan are both legends of the game, so set your expectations high. It will likely be a neck and neck battle between these two poker icons. Match Could Extend to Round 8

The duo will definitely give it their all in Round 4, but the action will not end there. As per the rules of the show, the pair will continue their rivalry in Round 5 regardless of who takes down […]