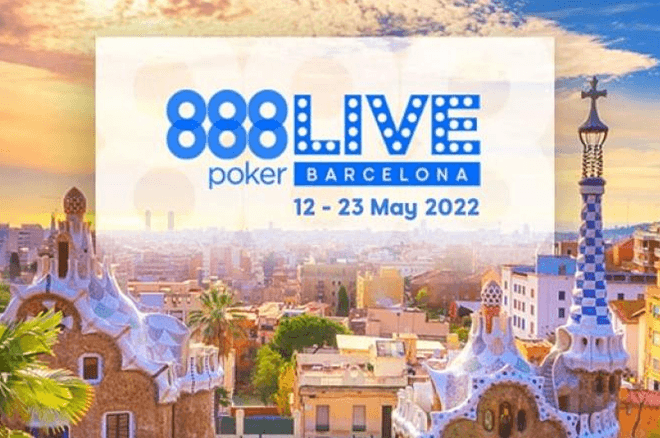 The latest edition of 888poker LIVE Barcelona, the first since the tour dropped anchor there in 2019, takes place at the Casino Barcelona from May 12 through to May 23 and features tournaments with buy-ins starting at only €55 and increasing to a €5,300 Super High Roller!

The lure of the festival is so strong that the entire 888poker Ambassador and Streaming team is set to jet off to Spain for its entirety. This means you could be rubbing shoulders with the likes of Vivian Saliba , Sam Abernathy , Jordan Banfield , plus special guests Dan “Jungleman” Cates , Maria Ho , and Michael “The Grinder” Mizrachi . 888poker LIVE Barcelona Events Schedule

Get Ready For An Epic 888poker LIVE Barcelona Main Event

Every tournament on the 888poker LIVE Barcelona schedule is going to be popular but it is the €1,100 buy-in Main Event that all the traveling players want to win. The Main Event features four starting flights, including one that is turbo-structured. There is a big blind ante in play at all times in addition to a 30-second shot clock meaning the action continues flowing throughout.

The 888poker LIVE Barcelona Main Event first crowned a champion in 2017. Italy’s Luigi Shehadeh came out on top of a 609-strong field to turn his €1,100 investment into €110,000. The following year saw 709 players buy in who were all outlasted by Romanian grinder Adrian Constantin . He walked away with €114,025 after a heads-up deal with Spain’s Joel Isla Gonzalo , who secure the exact same payout.

Gabriele Rossi is the reigning champion having taken down this event in June 2019. Rossi, another Italian winner, was the last plyer standing from a field of 551 entrants. He banked a cool €110,000. Win […]