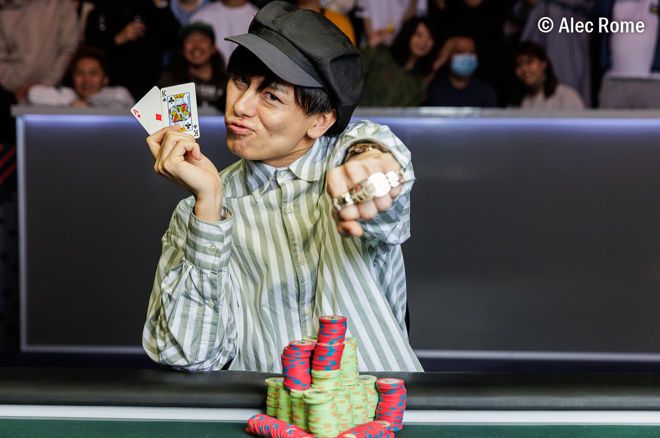 Shota Nakanishi There were five players who returned for the final day of Event #60: $10,000 Short Deck No-Limit Hold’em and it was the start-of-day chip leader Shota Nakanishi who walked away with his first World Series of Poker gold bracelet along with $277,212.

Nakanishi overcame a record-setting field of 110 entries at this buy-in level for the short-deck variant of no-limit hold’em. It was a tall order for the Japanese poker player with four of the best players in the world joining him at the table on Day 3. It came down to a battle between Nakanishi and Ben Lamb but Nakanishi found a way to come out on top.

“I play lots of short deck, many times,” Nakanishi said after his victory. “I’ve been playing online for three years. I also enjoy no-limit hold’em and sometimes pot-limit Omaha.”

There was a large contingent of Japanese supporters on the rail and they burst into cheers on the final hand of the day. Lamb found himself back on the short stack and got his chips in the middle with ace-queen but ran dead into the ace-king of Nakanishi who found a clean runout, something that doesn’t occur often in this highly volatile game. Final Table Payouts

There were five players that returned to the felt at 1 p.m., well besides Sean Winter who showed up ten minutes late. The players waited for him to arrive after pitching the cards on the first hand but it didn’t take long after that for the chips to start flying.

In just the second hand of the day, Lamb flopped a straight and scored a huge double-up through Stephen Chidwick who flopped two pair and turned a flush draw. Chidwick was down to just 25 antes, which in this game, is not very much. Just moments later, Chidwick was the first to hit the rail in fifth place.

After a short break in between levels, four players returned to felt and Winter was on the short stack. The “lucky ladies” were not so lucky today as his pocket queens were no match for the pocket […]